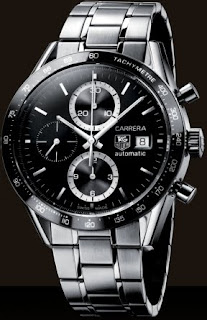 No...this is NOT an Omega. This is Tag Heuer Carrera Automatic...

Tag watches are world famous, worn and endorsed by celebs, sportsmen and politicians.


Whereas Omega was only made famous by Mr Sleuth James Bond 007. Omega was the official timepiece for Mr Bond, as much the Aston Martin was his ride in the pre-Millennium Bond movies but the honour is now with BMW.


Jaguar was the official ride for British sleuth Simon Templar's tv series while Volvo S40 was the sleuth's ride in The Saint, the movie. The was no official timepiece.


Recently Omega was suddenly a well-known brand so much so a longhouse chieftain (tuai) in Sarawak had asked a certain politician of a his watch reported missing (or was it stolen?) from a certain hotel room. That means the tuai was a well-informed person, especially on the brand.


In fact the whole country is overwhelmed by this Omega brand, i.e. a certain specially-designed model said to be a gift from a certain Arab kingdom.


The problem with the politician was that he is an Omega, not a Tag Heuer.


For guys (yours truly included) with Tag, we are just like the brand, "Tag Heuer: Don't Crack Under Preassure"... 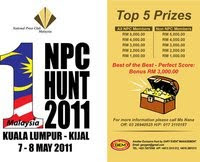 The motoring-picture-walk hunt is scheduled on May 7 to 8 and to be flagged-off from NAZA World in Petaling Jaya and ends at Awana Kijal Golf and Beach Resort in Kemaman, Terengganu.

This year's hunt is offering the biggest prize money in treasure hunting fraternity -- RM 8K for the Perfect Score Team, picking up RM5K as category champions and RM 3K for the Best of The Best Award. There was no winners for the previous year's hunt to Kuantan.

The Perfect Score Team is also named The Best Of The Best!
Two categories -- Members and Non-Members await participants who will pay RM 180 for members and RM 200 for Non-Members. Non-Members can also sign up to become members and enjoy the discounted fee as Members of the National Press Club or NPC.

YB Dato' Seri Ahmad Shabery Cheek, Minister of Youth and Sports will host the prize-giving dinner at Awana Kijal, Kemaman in Terengganu and give away the prizes to champions and almost-champions. He is also the Member of Parliament for Kemaman.

He will launch the event at the NPC Clubhouse on April 18, 2011 at 8pm and will receive pledges of contributions from sponsors. Meanwhile, members of NPC and the public can always sign up for the hunt by contacting Miss Nana, our Club Manager at +6017-311 0187 for the entry form. Efforts are also underway to make the form and rules+regulations available online.